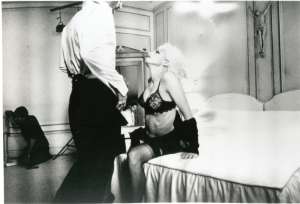 not a complete list, but some of the interesting cases…

1. Rick James- “Superfreak” (1981). Banned because it “did not fit the rock format of MTV” in the pre-Michael Jackson landscape. Before MJ, only a few black artists were played on MTV. Rick James accused MTV of “blatant racism”.

3. Nine Inch Nails- “Closer” (1994). This influential video by Mark Romanek was banned for featuring the following:

4. Prodigy- “Smack My Bitch Up” (1997). Banned for nudity, drinking and driving, assault on both sexes, cocaine use, vomiting scenes, violence, sex, and strippers. (spoiler alert: the person causing all of this shit is a woman)

5. Neil Young- “This Note’s For You” (1988). The video made fun of celebrities and corporate sponsorships. It was originally banned by MTV after threats from Michael Jackson’s lawyers (he was heavily mocked in the vid). After the video became a huge hit on MuchMusic, MTV decided to air it. It won the 1989 VMA for video of the year.

6. Queen- “Body Language” (1982). The first ever video banned for MTV, due to homoerotic imagery and sweat. Ha.

I'm a social media and content strategist, and DJ living in Chicago. I enjoy obsessing over old musicians.

Invasion of Privacy, Cardi B
"Womp, Womp", Valee and Jeremih